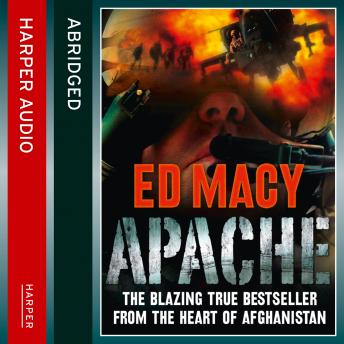 'Apache' is a blazing true story from the heart of Afghanistan - a tale of courage, comradeship, technology and tragedy, straight from the cockpit of the world's deadliest helicopter.

Includes an exclusive 20 minute Q & A with the author

When Ed Macy's career in the Paras was cut short by a brutal accident, he thought he'd never fight again. But joining the Army Air Corps gave him the chance to return to the front line. And when the army launched its attack helicopter programme, Ed was the first to sign up.

The Westland Apache AH Mk 1 is the deadliest, most technically advanced helicopter in the world -and only the top two per cent of pilots even make it through the training.

In 2007, Ed's Apache squadron was dispatched to Helmand, Afghanistan. Their mission: to protect the men on the ground. So when a marine goes missing in action during an attack on a Taliban stronghold, Ed and his team know they are the Army's only hope of getting him out ...

This title is due for release on September 15, 2008
We'll send you an email as soon as it is available!