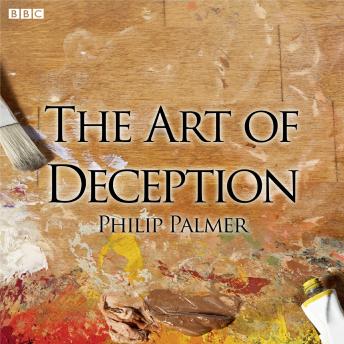 The Art Of Deception: Complete Series

All five episodes of the Radio 4 full-cast detective drama written by Philip Palmer. Originally broadcast as the ‘Woman’s Hour’ drama during the week commencing 22 June 2009. The story takes place in the present day, and centres on notorious art forger Daniel Ballantyne, newly released from prison but now dying, who is telling his life's story to an art critic and journalist, Jessica Brown, to help her write a book about forgery. But Jessica soon comes face to face with the darker side of the art world and finds herself trapped in a game of cat-and-mouse, in which her reputation, and her life, are in jeopardy. Starring David Schofield as Daniel Ballantyne and Indira Varma as Jessica Brown. Also featuring Matt Addis, Jonathan Keeble, Belinda Lang, John Biggins, Malcolm Tierney, Philip Fox and Benjamin Askew. Directed by Toby Swift. WARNING: this recording contains scenes which some listeners may find disturbing.