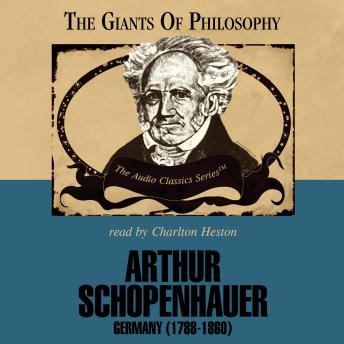 Arthur Schopenhauer was the most articulate and influential pessimist in the history of human thought. He was convinced that the space and time of ordinary life is an illusion, that the world consists of two aspects: representation (visible appearances) and will (hidden reality). Will is a unitary, blind, irrational force underlying all nature and expressing itself throughout it. Since human actions are blindly propelled by this will, not reason, prescriptive ethical rules have little force. Our will to live is a continuing cycle of want, temporary fulfillment, and more want. New desires replace any satisfied ones, so no lasting happiness is possible.
The Giants of Philosophy series is a collection of dramatic presentations, in understandable language, of the concerns, questions, interests, and overall outlook of the world’s great philosophers and philosophical traditions. Special emphasis on clear and relevant explanations gives you a new arsenal of insights toward living a better life.