As the World Burns: The New Generation of Activists and the Landmark Legal Fight Against Climate Change 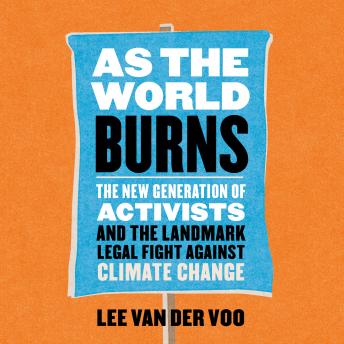 “The story of Juliana v. United States and the committed young people behind it will give you hope in the next generation.” —Elizabeth Kolbert, author of The Sixth Extinction

Do our children have a right to inherit a livable planet? Is the government obliged to protect it? Twenty-one young people from across America have sued the federal government over climate change, charging that actions promoting a fossil fuel economy violate their constitutional rights to life, liberty, and property. Their trial could be the civil rights trial of the century, but the government has used arcane legal tactics to stymie its progress at every turn.

As the World Burns by investigative reporter Lee van der Voo follows the plight of the young plaintiffs, chronicling their legal battle as their childhoods are consumed by another year of drought and wildfire, floods and hurricanes, and the most tumultuous political season in modern history. As the World Burns is climate breakdown like you’ve never seen it—through the eyes of the young.

As the World Burns: The New Generation of Activists and the Landmark Legal Fight Against Climate Change