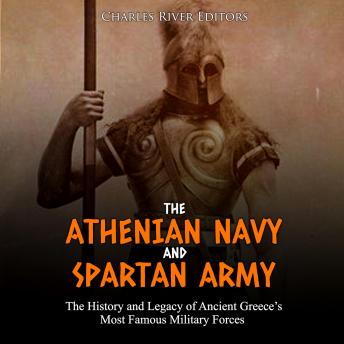 The Athenian Navy and Spartan Army, The: The History and Legacy of Ancient Greece's Most Famous Military Forces

"Forward, sons of the Greeks,Liberate the fatherland,Liberate your children, your women,The altars of the gods of your fathers,And the graves of your ancestors: Now is the fight for everything." - The Greek battle hymn sung before the Battle of Salamis according to Aeschylus


Dominated to this day by the sprawling white marble complex of the Acropolis, Athens is a city which is immensely and rightly proud of its past. For a period of roughly three centuries, the polis of Athens stood, if not in a position of unchallenged supremacy among the cities of Hellas, then at the very least among its three most important polities. Its fledgling empire, though small by the standards later set by Alexander or the Romans, or even by those of its ancient enemy Persia, nonetheless encompassed cities as far afield as Asia Minor and Southern Italy, a remarkable fact considering such expansion was achieved by the inhabitants of a single city and its immediate surroundings, rather than by an entire nation.


Yet despite a martial tradition that, if taken as a whole, was second to none save the Spartans, Athens is chiefly remembered for two reasons: its political system, which would in time form the nucleus of all Western democratic systems of government, and the remarkable number of outstanding individuals which, during the Golden Age of Athens, lived and flourished in the enlightened city-state. The Ancient Athenians formed the backbone of the West's entire culture, from the arts to philosophy and everything in between. In virtually all fields of human endeavor Athens was so much at the forefront of dynamism and innovation that the products of its most brilliant minds remain not only influential but entirely relevant to this day.


The most unique city-state in Ancient Greece was Sparta, which continues to fascinate contemporaneous society. It is not entirely clear why Sparta placed such a great emphasis on having a militaristic society, but the result was that military fitness was a preoccupation from birth. If a Spartan baby did not appear physically fit at birth, it was left to die. Spartan children underwent military training around the age of 7 years old, and every male had to join the army around the age of 18.


The Spartans, whose carefully constructed approach to warfare and - there is no other word for it - Spartan way of life, earned the grudging admiration of all of Greece and succeeded in establishing themselves in the years following the reforms of the semi-legendary ruler Lycurgus as the greatest military force in all of Hellas. Athens might have the mightiest fleet and the greatest cadre of philosophers and dramatists, Thessaly might have had the most vaunted cavalry, and the great city-states of Argos, Thebes and Corinth all had their own claims to fame, but on the battlefield the Spartan phalanx stood without peer. So feared were they in Greece that their very appearance on the battlefield could cause entire enemy armies to flee in terror, and in one of history's most famous battles, 300 Spartan warriors headed a combined Greek force which held off the hundreds of thousands of Persian warriors of Xerxes's invading army for three days at Thermopylae, inflicting an estimated 20,000 casualties upon them before dying to the last man rather than retreating.


The Spartan Military: The History and Legacy of the Ancient World's Most Renowned Army looks at the history of the Spartan military, and how it became one of the most fearsome fighting forces in history.

Athenian Navy and Spartan Army, The: The History and Legacy of Ancient Greece's Most Famous Military Forces