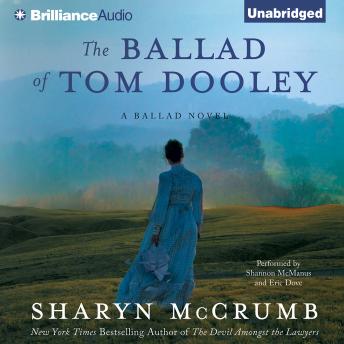 The Ballad of Tom Dooley

The Kingston Trio's folk song "Tom Dooley" tells the story of the murder of Laura Foster, a simple country girl involved with returning Confederate soldier Tom Dula. But Tom was also engaged in a passionate affair with his childhood sweetheart, the beautiful - and married - Ann Melton. One May morning in 1866, Laura Foster stole her father's horse and left home, telling a neighbor that she was eloping to Tennessee. Three months later her body was found in a shallow grave only a few hundred yards from where she was last seen. The sensational elements in the case attracted national attention: a man and his married lover accused of murdering the other woman; the former governor of North Carolina, spearheading the defense; and a noble gesture from the condemned man on the eve of his execution, saving the woman he really loved. With the help of Wilkes County historians and researchers, author Sharyn McCrumb visited the actual sites, studied the legal evidence, and concluded that the traditional story did not make sense. Consulting the maps, the trial transcripts, and the census records, she uncovered a missing piece of the story that will shock those who think they already know what happened. What seemed at first to be a sordid tale of adultery and betrayal has been transformed by new discoveries into an Appalachian Wuthering Heights. The fictional retelling of the historical account became an astonishing revelation of the real motives and the real culprit in the murder of Laura Foster.