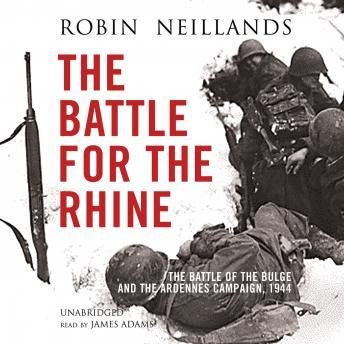 The Battle for the Rhine: The Battle of the Bulge and the Ardennes Campaign, 1944

Who was really responsible for the failure at Nijmegen, the destruction of the British First Airborne Division at Arnhem, and the failure of Operation Market Garden? Why was Montgomery threatened with the sack when he had just retrieved Bradley's failure in the Battle of the Bulge? Was General Eisenhower's command strategy either workable or wise, and did Bradley and Patton undermine it? Even after sixty years, the questions remain.
In this account of the 1944 post-Normandy campaign, historian Robin Neillands disentangles events from the media myths that have come to surround them to get to the truth of what really happened. He examines the often difficult relationship between General Eisenhower and British Field Marshal Montgomery. If Eisenhower had taken his advice, would the Allies have made quicker progress? Could the war in Europe have been won in 1944 if the right strategies had been employed?
With superb battle narratives and clear analysis of success and failure at every point, Neillands casts a new and informed light on the costly struggle for the Rhine.

Battle for the Rhine: The Battle of the Bulge and the Ardennes Campaign, 1944

This title is due for release on October 31, 2008
We'll send you an email as soon as it is available!