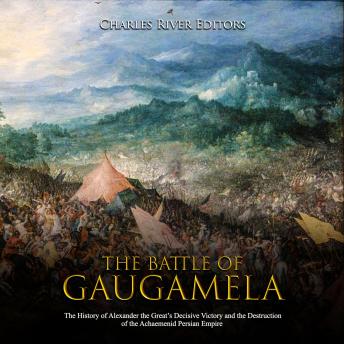 The Battle of Gaugamela: The History of Alexander the Great's Decisive Victory and the Destruction of the Achaemenid Persian Empire

At one point in antiquity, the Achaemenid Persian Empire was the largest empire the world had ever seen, but aside from its role in the Greco-Persian Wars and its collapse at the hands of Alexander the Great, it has been mostly overlooked. When it has been studied, the historical sources have mostly been Greek, the very people the Persians sought to conquer. Needless to say, their versions were biased, and attitudes about the Persians were only exacerbated by Alexander the Great and his biographers, who maintained a fiery hatred toward Xerxes I of Persia due to his burning of Athens. The Macedonians targeted many of his building projects after their capture of Persepolis, and they pushed an even bleaker picture of the king, one of an idle, indolent, cowardly, and corrupt ruler. It was not until excavations in the region during the 20th century that many of the relics, reliefs, and clay tablets that offer so much information about Persian life could be studied for the first time. Through archaeological remains, ancient texts, and work by a new generation of historians, a picture can today be built of this remarkable civilization and their most famous leaders.

Of course, far more is known about Alexander the Great and his military accomplishments, the most important of which was bringing about the demise of the Persian Empire. Over the last 2,000 years, ambitious men have dreamed of forging vast empires and attaining eternal glory in battle, but of all the conquerors who took steps toward such dreams, none were ever as successful as antiquity’s first great conqueror. Leaders of the 20th century hoped to rival Napoleon’s accomplishments, while Napoleon aimed to emulate the accomplishments of Julius Caesar. But Caesar himself found inspiration in Alexander the Great (356-323 BCE), the Macedonian king who managed to stretch an empire from Greece to the Himalayas in Asia by the age of 30.