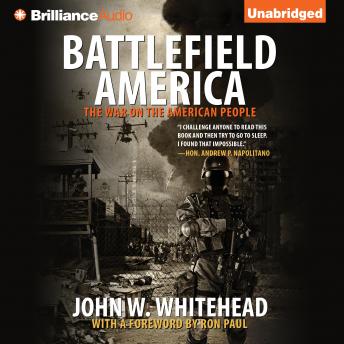 In BATTLEFIELD AMERICA: THE WAR ON THE AMERICAN PEOPLE, the follow-up to his award-winning book A Government of Wolves: The Emerging American Police State, constitutional attorney John W. Whitehead paints a terrifying portrait of a nation at war with itself and on the verge of undermining and destroying the basic freedoms guaranteed to all citizens in the Constitution.

Indeed, police have been transformed into extensions of the military. Towns and cities have become battlefields and the American people turned into enemy combatants to be spied on, tracked, scanned, frisked, and searched-subjected to all manner of intrusions as they are intimidated, silenced, raided, manhandled, shot at, locked up, and denied due process.

Yet this police state did not come about overnight. As Whitehead observes, this shift into totalitarianism cannot be traced back to a single individual or event. Instead, the evolution has been so subtle that most Americans were barely aware of it taking place.