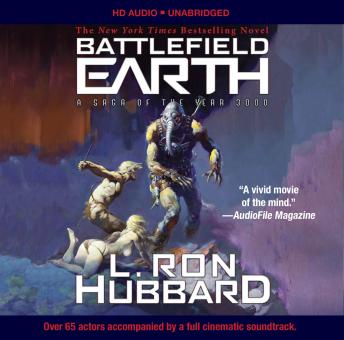 Battlefield Earth is a science fiction saga of adventure, daring and courage, when man is an endangered species and the future survival of what's left of the human race is at stake.

In the year 3000 AD, man has been savagely ruled for a thousand years by a space-plundering alien race of nine-foot high, gas-breathing conquerors from the planet Psychlo.

One of the Psychlos, the villainous Terl, enslaves a man-creature and forces him to mine Earth gold. Terl’s plan: to teleport the gold to Psychlo, where he can then return wealthy and powerful.

From this dystopian landscape, a slave emerges —Jonnie Goodboy Tyler. As a member of the dwindling community of only 35,000 human survivors, Jonnie has plans to free mankind from alien tyranny—and cause the ultimate destruction of the Psychlo empire.

But is Jonnie’s fight to save humanity from these gigantic and technologically superior monsters a losing battle? Or will humans regain the Earth once more?

A fully immersive audiobook with HD sound.
Experience the epic adventure that changed the shape of science fiction forever."