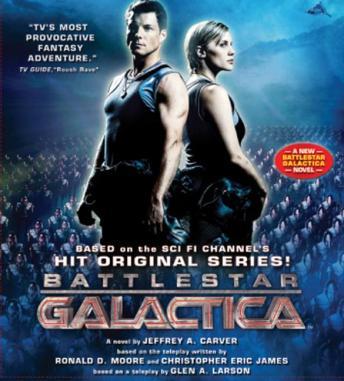 For forty years, the Twelve Colonies of Man experienced peace, united since the war against the man-made Cylons. The Cylons, mechanical beings created to perform the manual labor civilization required, were gone forever...or so humanity thought.
But in those years, the Cylons developed new Cylons that looked and acted like humans--with one goal in mind: to destroy all humanity! When they suddenly attacked the Twelve Worlds, humanity's extinction seemed inevitable.
Only a single warship survived the massive attack: Battlestar Galactica, the oldest ship in the fleet, ready to be decommissioned and turned into a museum. Commander William Adama, himself set to retire, had but one course: to marshal the meager forces available, a ragtag crew of misfits and green recruits, to prevent their enemy from wiping out the last vestiges of the human race. But the Cylons, stronger, smarter, and driven to destroy their creators, may just be too powerful for them and all of humanity to survive.