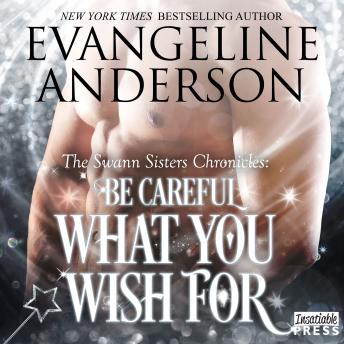 Be Careful What You Wish For: The Swann Sisters Chronicles (Book Two)

Cassandra Swann is about to find out. Because she and her sisters are 1/8th fairy--not enough to do any magic--just enough to get them a Fairy Godmother from hell whose reckless spells makes their lives miserable. When her older sister decides to take the FG to court, Cass gets caught in the crossfire. Hit by their godmother with a disastrous birthday wish, she is in danger of losing what she loves most--her ability to paint.

Because the court is in the realm of the Fae, Cass and her sisters have a Court Appointed Elf who acts as their attorney slash bodyguard. But who ever heard of a 6 foot 4 muscular elf with coal-black hair and intense green eyes? Sparks fly the first minute Cass meets Jacobin O'Shea. She resents his high-handed ways and Jake thinks Cass is a spoiled human brat. But after he saves her from a soul-sucker and sees her art, things begin to change between them.

But Cass's ability to paint is still screwed up. Every painting she attempts climbs off the canvas and makes trouble in the real world. When the Fae court assigns her a new Fairy Godmother, things get exponentially worse when her new wish multiplies her living art. To make matters even more difficult, Jake's ex-fiancée--a gorgeous, anorexiclly-thin  fairy--has Cass in her crosshairs and is determined to ruin anything that might grow between them. And did we mention Cass's grandmother is going on disastrous dates that fill the house with Star Trek conventioneers, bikers, and nudists?
It's a mess only magic could make...or fix.

Will Cass and Jake ever get past their differences? Will Cass regain her ability to paint without every painting stepping off the canvas? (Really, Fairy Godmother?) And will Cass's grandmother find a man without burning down the house?

You'll have to read Be Careful What You Wish For, the second book in the Swann Sisters Chronicles to find out.

Be Careful What You Wish For: The Swann Sisters Chronicles (Book Two)

This title is due for release on October 27, 2018
We'll send you an email as soon as it is available!