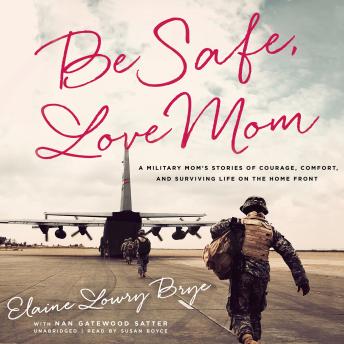 Be Safe, Love Mom: A Military Mom’s Stories of Courage, Comfort, and Surviving Life on the Home Front

When you enlist in theUnited States military, you don't just sign yourself up for years of duty-youalso commit your loved ones to a life of service all their own.
No one knows this betterthan Elaine Brye, an army brat turned military wife turned military mom of fourofficers, each serving in a different branch of the military: Air Force, Army,Marine Corps, and Navy.
Brye's father and mothermet while both serving in the US Army, and her childhood was that of a typicalarmy brat, with frequent moves-some to faraway countries-dinner-tableconversations full of military lingo, an ever-present anxiety during herfather's deployments to Vietnam and elsewhere, and family vacations to nationalmonuments and battlefields. In 1976-the first year women were accepted in theservice academies and ROTC-Brye herself enlisted in the Air Force, where shewould later meet her husband, an Air Force pilot.
Now Elaine Brye is a momto four military officers, and for more than a decade she's endured countlessteary goodbyes, sparse communication from boot camps and training summers, deployments,emotional airport reunions, empty chairs at Thanksgiving dinners, and sleeplesshours waiting for phone calls in the night. She's navigated the complicatedtangle of emotions-pride, worry, fear, hope, and deep, enduring love-thataccompanies life as a military mom.
In Be Safe, Love Mom Brye reflects on her family's military serviceand offers a lifetime's worth of insight, comfort, wisdom, and a bit of humorto fellow military moms who are navigating the unpredictable life thataccompanies having a child-or children-in uniform.
In intimate andinstructive essays-on topics ranging from that first goodbye on induction dayto the comforting power of the military community, from the healing power offaith to coping with the enormous sacrifice military life requires-Brye braidstogether her own personal experiences with those of fellow parents she's metalong the way, offering gentle guidance and hard-earned wisdom to those new tothe sisterhood of military moms.
In this one mom doing herbest to hold down the home front, readers will find a wise and endearing friendto guide them through the unpredictable life of having a child in uniform, allthe while reminding us that within each military mom's personal story liesuniversal experiences of courage, loss, loneliness, faith, pride, andultimately, a parent's unconditional love.

Be Safe, Love Mom: A Military Mom’s Stories of Courage, Comfort, and Surviving Life on the Home Front