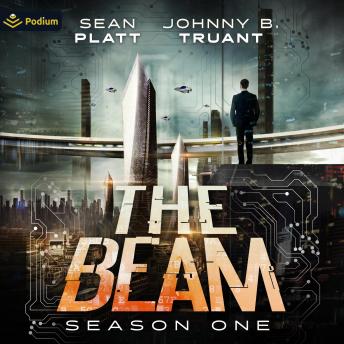 'A sci-fi political thriller set in a terrifyingly real future


When all of humanity is connected, the center of the web is the seat of true power.


The world's old political borders have dissolved. The NAU is civilization's carcass, a nation ruled by two political parties: Enterprise, the sink-or-swim party where each party member has no one else to blame for their starvation or astronomical wealth; and Directorate, whose members have a guaranteed safety net but can never rise above their station.


Every six years, an election determines the NAU's future. The process is called Shift, and the next one is approaching. With humanity intertwined by way of the Beam — a hyper-advanced version of the Internet that serves every whim and need — Shift is the be-all and the end-all. More than an electoral method, it is the future's political discourse.


In the midst of tumultuous politics, some players are making their own moves. Doc, a black-market nanoenhancement vendor, discovers a disturbing trend of upgrades among his clientele. Nicolai, political speechwriter for the head of Directorate, struggles to find his independence in a life that is supposed to be devoted to the Party, all the while unaware of his own terrifying connection to the Beam. And Kai, an escort and assassin as lethal as she is flexible, becomes embroiled in the machinations of her top clients — because after all, the political elite choose only the best to warm their sheets at night.


And through it all, a shadowy group is pulling strings behind the scenes, guiding Shift exactly where they want it to go. Their identities are unknown to all but a few, and anyone who stumbles upon them by accident — or, worse, learns their true goal — is swiftly disposed of. But if their power goes unchecked, they will shape the fate of millions for years to come …


Plug your mind into The Beam. It's been waiting for you.

by Sean Platt, Johnny B. Truant

This title is due for release on October 17, 2014
We'll send you an email as soon as it is available!