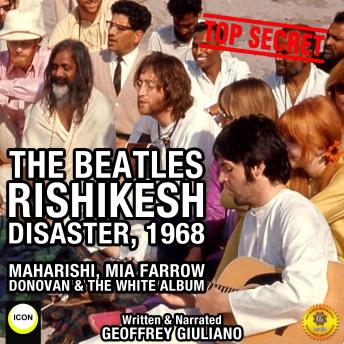 In 1968, the Beatles trekked to a remote, mysterious, and beautiful part of India known as Rishikesh, or the valley of the saints. For literally thousands of years, this remote riverside valley has been a magnet for advanced yogis, mystics, and seekers of truth. In 1968, it was the absolute zenith of all of this and the pop world as well. It was here the Beatles wrote dozens of now iconic songs while meditating at the feet of the lauded spiritual master. Along with many of the world's most celebrated people, the group once again led the way as innovators in not only music, but innate spirituality as well.

Fifty years later, we remember the group's bold trek and artistic accomplishment in this inspirational audio biography from Beatles author and historian Geoffrey Giuliano. The Maharishi, the Beatles, and friends tell their own story in this one-of-a-kind celebration of a magical time gone by. If you are a fan of the Beatles and love their music, you have to have this extended, in-depth look at the birth of The Beatles' White Album.

In 1992 Geoffrey Giuliano was asked if he would do an exclusive interview with the Maharishi in Switzerland. The author readily agreed as the reclusive spiritual master almost never met the press and he was embarking on an ambitious program of mass meditation to try to purify vast areas of the United States. After a great deal of negotiation, the two finally got together on Christmas Eve and had a prolonged, stirring conversation that is documented here. In addition, the Maharishi was joined by the late world-class magician Doug Henning. Put together with a chronological, historical narration by Giuliano, here is your chance to go one on one with one of the greatest spiritual minds of our time. This is the complete, exhaustive, untold story of the Beatles and the Maharishi, circa 1968.

This title is due for release on April 18, 2021
We'll send you an email as soon as it is available!