Before Versailles: A Novel of Louis XIV 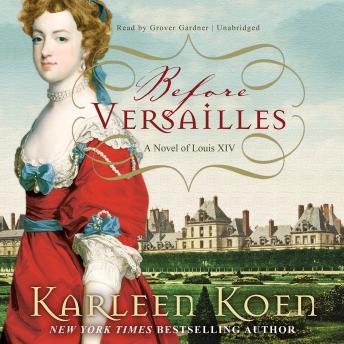 New York Times bestselling author Karleen Koen offers another delightful historical novel that will transport you to another time and place.
Louis XIV is one of the best-known monarchs ever to grace the French throne. But what was he like as a young man-the man before Versailles?
After the death of his prime minister, Cardinal Mazarin, twenty-two-year-old Louis steps in to govern France. He's still a young man, but one who, as king, willfully takes everything he can get-including his brother's wife. As the love affair between Louis and Princess Henriette burns, it sets the kingdom on the road to unmistakable scandal and conflict with the Vatican. Every woman wants him. He must face what he is willing to sacrifice for love.
But there are other problems lurking outside the chateau of Fontainebleau: a boy in an iron mask has been seen in the woods, and the king's finance minister, Nicolas Fouquet, has proven more powerful than Louis ever thought-a man who could make a great ally or become a dangerous foe.
Meticulously researched and brought vividly to life by the gorgeous prose of Karleen Koen, Before Versailles dares to explore the forces that shaped an iconic king and determined the fate of an empire.

Before Versailles: A Novel of Louis XIV