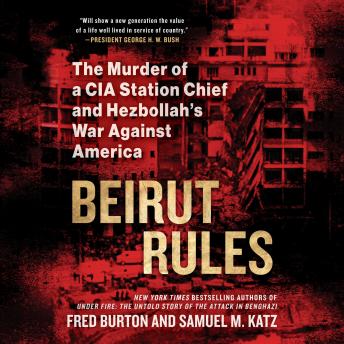 Beirut Rules: The Murder of a CIA Station Chief and Hezbollah's War Against America

From the New York Times bestselling coauthors of Under Fire--the riveting story of the kidnapping and murder of CIA Station Chief William Buckley.

After a deadly terrorist bombing at the American embassy in Lebanon in 1983, only one man inside the CIA possessed the courage and skills to rebuild the networks destroyed in the blast: William Buckley. But the new Beirut station chief quickly became the target of a young terrorist named Imad Mughniyeh.

Beirut Rules is the pulse-by-pulse account of Buckley's abduction, torture, and murder at the hands of Hezbollah terrorists. Drawing on never-before-seen government documents as well as interviews with Buckley's co-workers, friends and family, Burton and Katz reveal how the relentless search for Buckley in the wake of his kidnapping ignited a war against terror that continues to shape the Middle East to this day.

Beirut Rules: The Murder of a CIA Station Chief and Hezbollah's War Against America