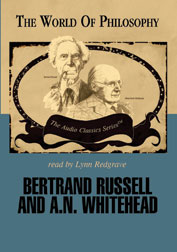 Bertrand Russell and A.N. Whitehead coauthored a seminal work in logic entitled Principia Mathematica. Russell wrote on virtually every aspect of philosophy, with particular contributions in ethics (where he championed important innovations). Whitehead developed one of the great philosophical systems of the century, attempting to harmonize science and values and to reconcile religion and philosophy.
The World of Philosophy series is a dramatic presentation, in understandable language, of the concerns, questions, interests, and overall outlook of the world’s great philosophers and philosophical traditions. Special emphasis on clear and relevant explanations gives you a new arsenal of insights toward living a better life.

This title is due for release on October 1, 1996
We'll send you an email as soon as it is available!