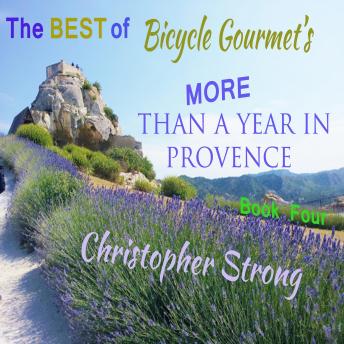 The Best of Bicycle Gourmet's More Than a Year in Provence: Book Four

France is a land of many treasures. Human, senic, historic and cultural. Although justly famed for it's wine, gastronomy, and fashions, France's greatest treasures are it's people.

They are the heart and soul of the French Nation. And,until you know them, personally, you really don't know this fascinating country. Regardless of the extent of your travels

Obviously, even though France is the number one overseas destination for North American travellers - not everyone will have chance to have an up close and personal french experience.

But - not to worry, because there is someone who speaks your language who has. San Francisco Film-Maker and Author Christopher Strong.

After cycling the French Country backroads for - as he puts it - 'a zillion and a half years' - and sharing his French Country adventures through his multi-media adventure series -'Treasures of France', his book,blog, and videos, Christopher has definitely 'been there - done that, and got ALL the tee-shirts.

And more to the point, He's still gliding through the French Country backroads. Tasting the land and the people,as well as the food and wine.

Now,in this book, he shares more tales of his memorable meetings with incredible people in fantastic locations.

Best of Bicycle Gourmet's More Than a Year in Provence: Book Four