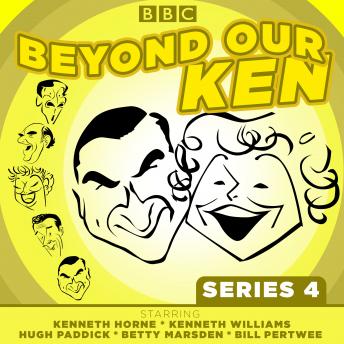 Beyond Our Ken: Complete Series 4

All nineteen surviving episodes from the fourth series of Beyond Our Ken, plus bonus programme Forty Laughing Years
A superb mélange of sketches and songs, liberally sprinkled with puns and double entendres, Beyond Our Ken made millions of listeners laugh out loud between 1958 and 1964. These nineteen fantastic episodes, published for the first time on audio, were initially broadcast on the BBC Light Programme between 1960 and 1961.
Featuring favourite characters including Charles and Rodney, Ambrose and Felicity and Cecil Snaith, not to mention Kenneth Horne himself, these classic shows are full of fun and laughter. Musical interludes are provided by Janet Waters, the Hornets and the BBC Variety Orchestra, conducted by Paul Fenoulhet.
The episodes include Suddenly Last Summer, Spring in Park Lane, The Gentleman's Agreement, Three Coins in a Fountain, The Man with the Golden Arm, House of Wax, Desire Under the Elms, Brief Encounter, The Thirty-Nine Steps, Gale Warning (followed by Scrooge), Room at the Top, The Horse Soldiers, All Quiet on the Western Front, The Charge of the Light Brigade, A Hatful of Rain, Twelve O'Clock High, Tea and Sympathy, Some Come Running and Tunes of Glory. Also included is the 1962 tribute programme Forty Laughing Years, hosted by Kenneth Horne.
(NB: This volume contains the nineteen surviving episodes from Series 4, plus bonus programme Forty Laughing Years. No recording of Episode 12, Thames Suicide Attempt, is now known to exist, and this episode cannot therefore be included.)

Beyond Our Ken: Complete Series 4