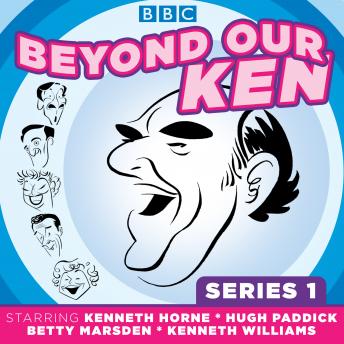 Beyond Our Ken: Series One

Kenneth Horne, Kenneth Williams, Hugh Paddick, Betty Marsden and Ron Moody star in the surviving 13 episodes from the very first series of the classic weekly show, the forerunner to Round the Horne.

Between 1958 and 1964, Beyond Our Ken lit up the airwaves. A madcap mix of sketches and songs, it remains as funny today as when it was first broadcast.

With episodes written by Eric Merriman and Barry Took, and musical interludes from The Malcolm Mitchell Trio and The Fraser Hayes Four, join avuncular host Kenneth Horne and friends in this hilarious precursor to Round the Horne. Duration: 6 hours 30 mins approx.

Beyond Our Ken: Series One