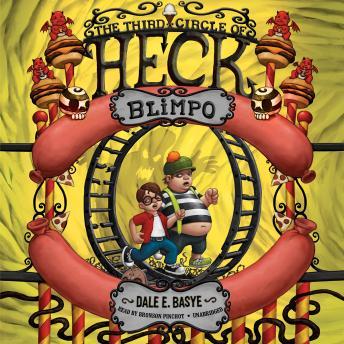 Blimpo: The Third Circle of Heck

With more clever, dark humor and zany silliness, Dale E. Basye sends Milton and Marlo Fauster back for thirds in another laugh-out-loud installment of the popular Circles of Heck series.
Welcome to Blimpo, where the, um, plump kids go.
After his second escape from Bea “Elsa” Bubb, the Principal of Darkness, Milton Fauster makes his way to Blimpo—the circle of the otherworldly reform school, Heck, where he’s sure his friend Virgil is sentenced. What Milton finds in Blimpo horrifies him. The overweight dead kids spend most of their time running on giant hamster wheels called DREADmills that detect and exploit their deepest fears. The rest they spend eating Hambone Hank’s barbecue—mystery meat that is delicious but suspiciously (to Milton, anyway) haunting. Every classroom has a huge television screen showing happy, thin people who taunt Blimpo residents with a perfection they will never attain.
Meanwhile, at her new job in the devil’s Infernship program, Milton’s sister, Marlo, knows all about trying to achieve perfection—and failing miserably. Can Milton get himself and Virgil out of Blimpo in time to rescue Marlo, too? Or is Fauster the next delicacy on Bea “Elsa” Bubb’s menu?

Blimpo: The Third Circle of Heck