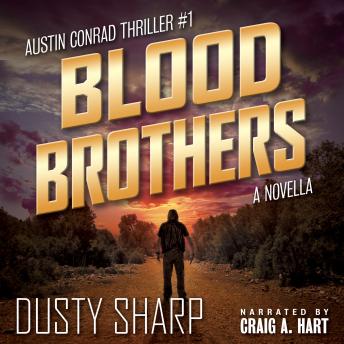 Narrated By: Craig A. Hart

A hardened criminal. A gut-wrenching revelation. Loyalty, brotherhood, and honor will be tested to the breaking point.

A decorated war hero turned jaded enforcer for a ruthless outlaw motorcycle club, Austin Conrad is a man with a checkered past and a conflicted conscience. Now, the honor he once had is rekindled with a devastating discovery about the club that was his legacy, and the men he once called 'brothers.' Can this hardened criminal look the other way, or will honor drive a wedge between him and the brotherhood that embraced him?

Ride into the gritty, criminal underworld that runs beneath the surface of Southern California’s glamorous facade. A fast-paced novella, Blood Brothers is the gripping introduction to this action-packed vigilante justice thriller series. Download it today and find out why readers are hailing Austin Conrad as 'Jack Reacher meets Sons of Anarchy!'

NOTE: This Novella is a 'Quick Listen' and priced accordingly. WARNING: Contains violence, profanity and irreverence, in equal measure.