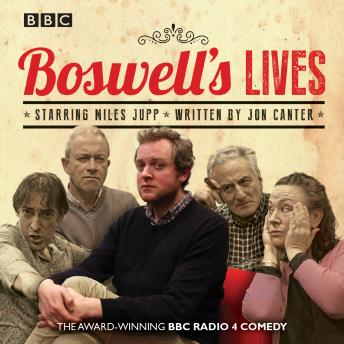 'A work of genius' Radio Times

James Boswell, Dr Johnson's celebrated biographer, turns time traveller to pursue other legends to immortalise in this award-winning comedy series. Hampered by his own pomposity and self-importance, he finds that his subjects get the better of him – with hilarious consequences.

Interviewing Sigmund Freud, Boswell is wrong-footed when Freud asks all the questions, and on meeting Maria Callas (and her poodle) he becomes caught up in an opera of his own making. While talking to Harold Pinter he finds himself the victim of a betrayal, and Boris Johnson proves to be a formidable opponent – especially on the whiff-whaff table.