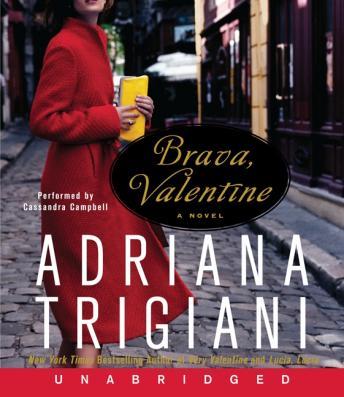 Adriana Trigiani's Very Valentine, an instant New York Times bestseller about the life of shoemaker Valentine Roncalli, was hailed by critics as "Sex and The City meets Moonstruck." (People)

As Brava, Valentine begins, Valentine learns that Alfred, her only brother and nemesis, has been named her partner at Angelini Shoes. Devastated, Valentine falls into the arms of Gianluca, a sexy Tuscan tanner. Despite their passion for one another, a long-distance relationship seems impossible.

As Valentine turns away from romance and devotes herself to her work, Bret Fitzpatrick, her first love and former fianc'e, encourages Valentine to exploit her full potential as a designer with a plan that will bring her singular creations to the world. A once-in-a-lifetime business opportunity takes Valentine to Buenos Aires, where she finds a long-buried secret. Once unearthed, the truth rocks the Roncallis and Valentine is determined to hold her family together. More so, she longs to create one of her own, but is torn between a past love that nurtured her, and a new one that promises to sustain her.

Brava, Valentine is Trigiani's best novel yet, delivering a hilarious and poignant mix of colorful worlds and unforgettable characters as only she can create them.