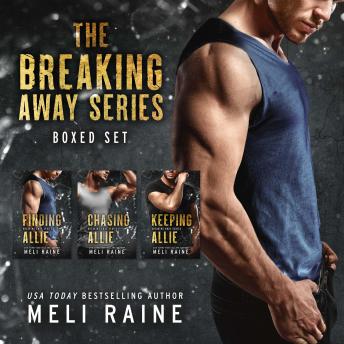 The Breaking Away Series Boxed Set

The son and stepdaughter of rival drug dealers, Chase Halloway and Allie Boden know the odds are stacked against them, but love doesn't care about odds. Love only wants to find a way.
Chase Halloway knows he'll take over his father's empire when old Galt Halloway's done, but he has dreams. Plans that have nothing to do with the drug ring his father's so carefully built since Chase's mom died years ago. Untamed and unmoored, when he sees Allie for the first time he realizes maybe the future doesn't have to be so lonely...
Protected by Chase during a blow-out brawl in her stepfather's bar, Allie can't believe the tattooed, muscled man who has eyes only for her really wants her...forever. With a past marred by her mother's death and a stepfather who won't let her leave for sinister reasons she doesn't understand, she wants to choose Chase and her own fate.
Drawn together by an attraction so strong they can't find words for it, and unable to resist a physical temptation so strong they can't deny it, can Chase and Allie's love survive kidnapping, murder, false accusations and more?
The Breaking Away Series Boxed Set contained the entire romantic suspense trilogy: Finding Allie, Chasing Allie, Keeping Allie. Each is a full-length novel, and by the end of book three Chase and Allie get the happily ever after they so richly deserve.