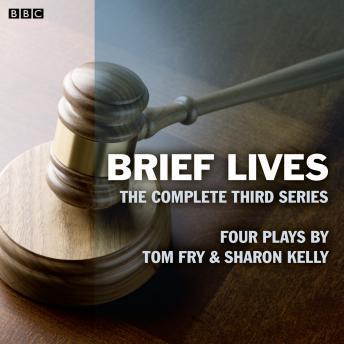 A series of four BBC Radio 4 plays set in a Manchester legal practice, written by Tom Fry and Sharon Kelly. Frank Twist and his bunch of legal reps return for another series of adventures on the mean-ish streets of Manchester. In the first play, Frank's best mate Mickey has finally met a young Russian woman who will put up with him, his music and his socks. But is she just using him? The second play sees Debby representing a posh, middle aged good time girl who has been held at the airport on suspected drugs charges. Meanwhile Sarah's sister suddenly shows up. In the third play Sarah is called to an army base to deal with a violent incident between two female soldiers. Who is telling the truth? And Doug goes to bat for Frank's son Louis when he's accused of being a serial biter in the nursery. In the fourth and final play, Frank is chipper; he's finally got his own parking space at the local nick. Life doesn't get any better. Starring David Schofield as Frank, Emma Atkins as Debbie and Tracey-Ann Oberman as Sarah. Also featuring in the cast are Eric Potts, Beth Palmer, Jonathan Oliver, Lisa Allen, James Quinn and Isaac Whitmore. Produced by Gary Brown, with original music by Carl Harms. Originally broadcast 28 April 2010 - 19 May 2010 in the 'Afternoon Play' slots.