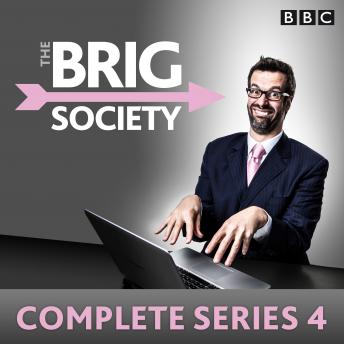 Extra! Extra! - Brigstocke Starts Own Newspaper Shock! Comedian Marcus Brigstocke presents a two-part special focussing on the great British press. In the first episode he plunges head first into the contents of the great British newspaper and comes up smelling of Daily Mail. Plus he reveals the headline of the year that you’ll never get to read... In the second episode there’s sex, scandal and saucy secrets on offer as Marcus examines how the great British press combine the difficult jobs of both selling newspapers and ruining peoples’ lives... Joining him are regular guest stars William Andrews (“Sorry I’ve Got No Head”) , Margaret Cabourn-Smith (“Miranda”) and Colin Hoult (from Ricky Gervaise’s “Derek”). Written by Marcus Brigstocke, Jeremy Salsby, Toby Davies, Nick Doody, Dan Tetsell & Steve Punt. This complete fourth series of the multi-award-winning show comes from the people who brought you Cabin Pressure and Armando Iannucci’s Charm Offensive. Duration: 1 hour approx.