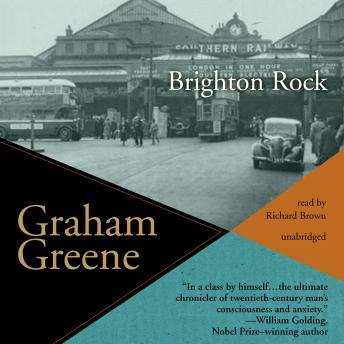 Originally published in 1938, Graham Greene’s chilling exposé of violence and gang warfare is a masterpiece of psychological realism and often considered Graham Greene’s best novel. It is a fascinating study of evil, sin, and the “appalling strangeness of the mercy of God,” a classic of its kind.
Set in Brighton, England, among the criminal rabble, the book depicts the tragic career of a seventeen-year-old boy named Pinkie whose primary ambition is to lead a gang to rival that of the wealthy and established Colleoni. Pinkie is devoid of compassion or human feeling, despising weakness of the spirit or of the flesh. Responsible for the razor slashes that killed Kite and also for the death of Hale, he is the embodiment of calculated evil. As a Catholic, however, he is convinced that his retribution does not lie in human hands.
He is therefore not prepared for Ida Arnold, Hale’s avenging angel. Ida, whose allegiance is with life, the here and now, has her own ideas about the circumstances surrounding Hale’s death. For the sheer joy of it she takes up the challenge of bringing the infernal Pinkie to an earthly kind of justice.
When finished, the listener is sure to ponder some lofty moral issues to which Greene, a Catholic writer, withholds easy judgments.

This title is due for release on March 2, 2011
We'll send you an email as soon as it is available!