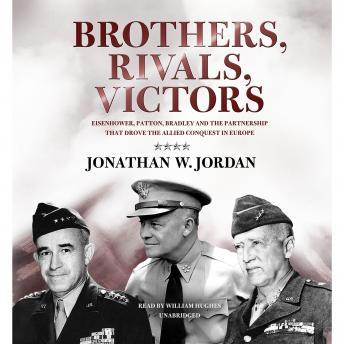 Brothers, Rivals, Victors: Eisenhower, Patton, Bradley, and the Partnership That Drove the Allied Conquest in Europe

The true story of the friendship—and rivalry—among the greatest American generals of World War II
Supreme Allied Commander Dwight D. Eisenhower, General George S. Patton, and General Omar N. Bradley engineered the Allied conquest that shattered Hitler’s hold over Europe. But they also shared an intricate web of relationships going back decades. In the cauldron of World War II, they found their prewar friendships complicated by shifting allegiances, jealousy, insecurity, patriotism, and ambition.
Meticulously researched and vividly written, Jonathan W. Jordan’s book recounts the battle for Europe through the eyes of these three legendary generals. For the first time in such detail, the bonds between them are explored, and readers are treated to an insider’s view of life at the summit of raw, violent power. Throughout three years of hard, bloody warfare, Eisenhower, the Alliance’s great diplomat, sought victory in the fighting qualities and tactical genius of his most trusted subordinates, Bradley and Patton. They, in turn, owed their careers to Eisenhower. Yet their friendship would be put to the ultimate test as life-and-death decisions were thrust upon them, and honor and duty conflicted with personal loyalty.
Brothers, Rivals, Victors is drawn from the candid accounts of its main characters and strips away much of the public image of “Ike” (Eisenhower), the “GI’s General” (Bradley), and “Old Blood and Guts” (Patton) to reveal the men behind the legend. Adding richness to this story are the words and observations of a supporting cast of generals, staff officers, secretaries, aides, politicians, and wives, brought together to produce a uniquely intimate account of a relationship that influenced a war. The story of how these three great strategists pulled together to wage the deadliest conflict in history, despite their differences and rivalries, is marvelously told in this eye-opening narrative that is sure to become a classic of military history.

Brothers, Rivals, Victors: Eisenhower, Patton, Bradley, and the Partnership That Drove the Allied Conquest in Europe