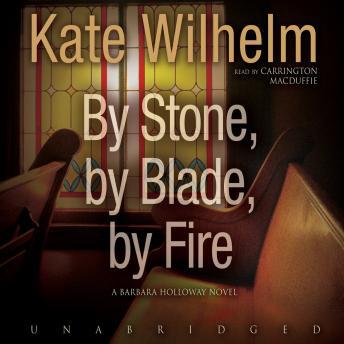 By Stone, by Blade, by Fire

Travis Morgan's case seems open and shut: a plot to kill his estranged father, fundamentalist preacher Arlie Morgan, goes awry and his bullet slays an innocent bookkeeper. Two eyewitnesses seal Travis' fate. But despite damning evidence and an admitted hatred of his father, Travis staunchly maintains his innocence.
Beseeched by his anguished mother, veteran defense attorney Barbara Holloway agrees to represent Travis. With the support of her father, attorney Frank Holloway, and crack private investigator Bailey, Barbara reveals a zealot, his ultrarich backers, and unimaginable atrocities. Travis' case proceeds to trial, and Barbara finds herself pitted against a complacent legal system and a judge eager to simply close the case and retire. Knowing she must intervene decisively to avoid a conviction, Barbara steps squarely into the path of danger. Risking her own life, Barbara confronts the killer in order to save Travis'.

By Stone, by Blade, by Fire

This title is due for release on December 3, 2012
We'll send you an email as soon as it is available!