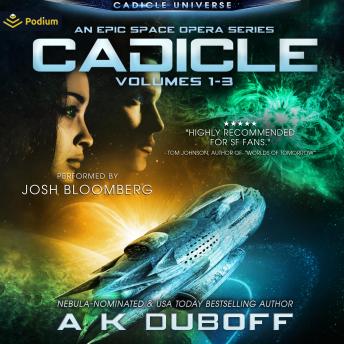 'The lost colony of Earth has no idea that the galaxy-spanning Taran empire is on the brink of an interdimensional war ...


When Cris leaves Tararia to pursue his telekinetic abilities, he thinks he's started a new life. Years later, he learns that freedom was always an illusion - he and his family are at the center of an elaborate galactic conspiracy. Written in the style of classic sci-fi from the Golden Age, the Cadicle series follows three generations of the Sietinen Dynasty as they discover their roles in a secret war. Torn by duty and morality, their decisions will change the course of the Taran civilization.


Cris was born with rare telekinetic gifts - abilities outlawed by the governing Priesthood. But, a new future awaits when Cris unexpectedly receives an invitation to join the Tararian Selective Service and begin their sanctioned telekinesis training program. Except, following that path puts him at the center of a generations-old galactic conspiracy.


The greatest deceptions are never suspected. After twenty years with the Tararian Selective Service, Cris Sietinen is in the unprecedented position of being both Lead Agent and heir to a High Dynasty. When his son is captured by the mysterious alien Bakzen, Cris uncovers a hidden truth that forces him to question all that he once took for granted.


A year after his encounter with the Bakzen, Wil is still grappling with his upcoming role in the war. Weighed down by his sense of duty and a grim vision of his fate, he has withdrawn from friends and family - focusing only on his official assignments. However, Wil finds unexpected support when he befriends a new TSS trainee from Earth, Saera. Through their budding relationship, Wil comes to terms with the purpose he was born to fulfill and gains comfort in the knowledge that he won't have to face the future alone.