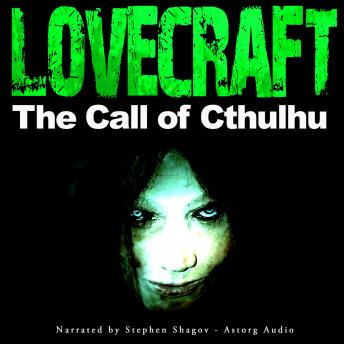 The Call of Cthulhu

"The Call of Cthulhu" is one of H. P. Lovecraft's best-known short stories. Written in the summer of 1926, it is the only story written by Lovecraft in which the extraterrestrial entity Cthulhu himself makes a major appearance. Lovecraft's writing, particularly the so-called Cthulhu Mythos, has influenced fiction authors including modern horror and fantasy writers. Stephen King, Ramsey Campbell, Bentley Little, Joe R. Lansdale, Alan Moore, for example, have cited Lovecraft as one of their primary influences. Beyond direct adaptation, Lovecraft and his stories have had a profound impact on popular culture. Howard Phillips Lovecraft was an American author who achieved posthumous fame through his influential works of horror fiction. Virtually unknown and only published in pulp magazines before he died in poverty, he is now regarded as one of the most significant 20th-century authors in his genre.