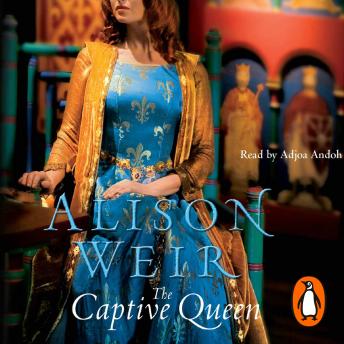 It is the year 1152 and a beautiful woman of thirty, attended by only a small armed escort, is riding like the wind southwards through what is now France, leaving behind her crown, her two young daughters and a shattered marriage to Louis of France, who had been more like a monk than a king, and certainly not much of a lover. This woman is Eleanor, Duchess of Aquitaine, and her sole purpose now is to return to her vast duchy and marry the man she loves, Henry Plantagenet, a man destined for greatness as King of England. Theirs is a union founded on lust which will create a great empire stretching from the wilds of Scotland to the Pyrenees. It will also create the devil's brood of Plantagenets - including Richard Cœur de Lion and King John - and the most notoriously vicious marriage in history.

The Captive Queen is a novel on the grand scale, an epic subject for Alison Weir. It tells of the making of nations, and of passionate conflicts: between Henry II and Thomas Becket, his closest friend who is murdered in Canterbury Cathedral on his orders; between Eleanor and Henry's formidable mother Matilda; between father and sons, as Henry's children take up arms against him; and finally between Henry and Eleanor herself.