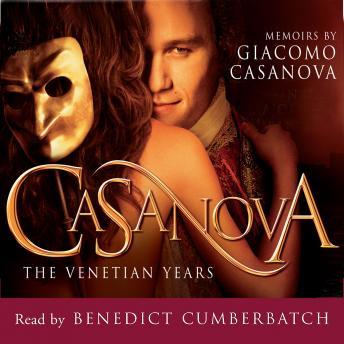 Casanova was so famous as a womanizer that his name remains synonymous with the art of seduction. He associated with European royalty, popes and cardinals, along with luminaries such as Voltaire, Goethe and Mozart.

Born in 1725 to Italian and Spanish parentage, Giacomo Casanova lived a long and exciting life. A scholar and an adventurer Casanova travelled widely throughout Europe and Russia associating with rulers and Kings. Of course Casanova is most well-known for his womanizing and he reveals time after time how he just couldn't help falling in love! His eloquence and charm will not be lost on the listener either: the writing is remarkably modern, accessible and funny too. It took Casanova eighteen years to write his memoirs and a further one hundred for them to be classified as genuine. Available now for the first time on audio, in this first volume of his memoirs Casanova charts his childhood and life as a young man in Venice and Italy.

This title is due for release on February 16, 2006
We'll send you an email as soon as it is available!