The Casebook Of Inspector Steine 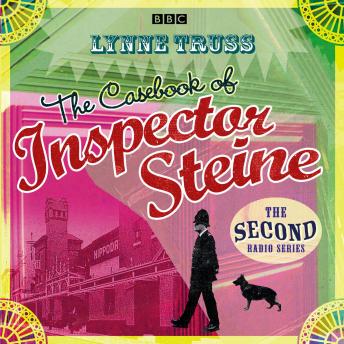 The second series of Lynne Truss's hugely popular BBC Radio 4 comedy thriller. Inspector Steine, the amiable, unworldly detective who refuses to believe in Brighton's criminal underworld, returns for another six episodes. It is 1957 and, as the series opens, all crime has stopped along the South Coast. But Mrs Groynes - the cockney charlady who is actually a criminal mastermind - is desperate to get back in business, and a performance at the Hippodrome gives her an idea. A day out in a vintage car turns out to be highly eventful, and Brunswick is kept busy organising a police open day featuring a range of criminal exhibits and going undercover as a careers master in a girls' school. Meanwhile, Steine meets the mysterious Lord Melamine - and finds his life in danger... Michael Fenton Stevens stars as Inspector Steine, with guest performances from Janet Ellis, Nicholas Le Provost and Mark Heap.'Delicious fun' - Sunday Times Culture Magazine