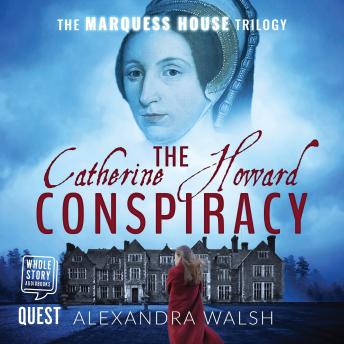 The Catherine Howard Conspiracy Is the first book in the Marquess House trilogy, a gripping dual timeline conspiracy thriller with an ingenious twist on Tudor history. Perfect for fans of Dan Brown, Philippa Gregory and Kate Mosse.

When Catherine Howard arrives at the court of King Henry VIII to be a maid of honour of the new queen, Anne of Cleves, she has no idea of the fate that awaits her. Catching the king's fancy, she finds herself caught up in her uncle's ambition to get a Howard heir to the throne. Meanwhile, in 2018 - Dr Perdita Rivers receives news of the death of her estranged grandmother, renowned Tudor historian Mary Fitzroy. Journeying to her grandmother's vast estate in Pembrokeshire, Perdita is drawn into the mystery of an ancient document in the archives of Marquess House, a collection of letters that claim the records of Catherine Howard's execution were falsified... What truths are hiding in Marquess House? And how was Perdita's grandmother connected to it all?