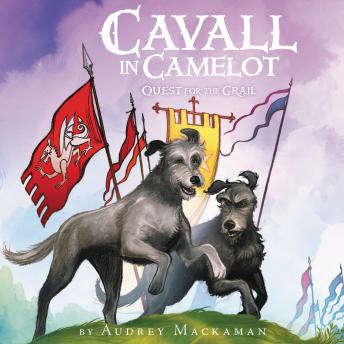 Cavall in Camelot #2: Quest for the Grail

King Arthur’s dog, Cavall, and the rest of Camelot thought their troubles were behind them after they defeated the Night Mare. But when Arthur’s son, Mordred, falls gravely ill, it seems that something sinister is afoot in Camelot once more.

The only thing that can cure Mordred is an ancient artifact hidden deep within the fay forest—an artifact that’s been missing for centuries. King Arthur declares a quest to recover it and will stop at nothing to save his son.

Cavall must lead his person and his friends deep into the enchanted forest in pursuit of the legendary grail. On the perilous journey, Cavall will come face-to-face with ancient mysteries, dangerous magic—and his own fears.

Why has his mercurial brother, Gless, joined the search—and can he be trusted? Is there any truth to the legend of the monstrous wolf that guards the grail? And what is the shadowy creature that seems to be following their every move? Cavall will have to answer all these mysteries and more before he and his person can return safely home.

Mackaman delights in this thrilling follow-up to Cavall in Camelot: A Dog in King Arthur’s Court, crafting a quick-paced adventure filled with twists and turns.

Cavall in Camelot #2: Quest for the Grail