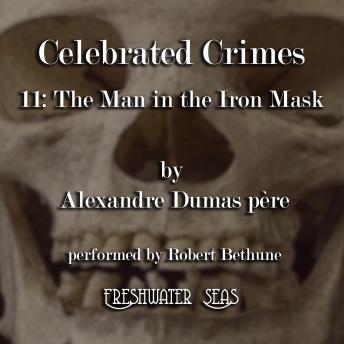 Celebrated Crimes 11: The Man in the Iron Mask

In this, the eleventh of the series, Dumas switches away from his usual narrative style and gives us, instead, a detailed review--almost a bibliographic essay--on the various ideas and theories advanced by historians, speculative writers and critics on one of the enduring fascinations of French royal history: the case of The Man in the Iron Mask.

Ever since the time of Louis XIV, the story has been told of a man mysteriously snatched out of the world and buried for life, not merely in a prison cell, but also in an mask of iron: an imprisonment designed to ensure that no one would ever know his name or even see his face. Dumas asks, who was the man in the iron mask? Why was he imprisoned? Why were such strange precautions taken, and why was he treated with such respect and care, given everything he asked for--except his freedom and his name?

Dumas is very scrupulous about his sources, carefully citing the full bibliographic details, while also indulging his novelist's flair for the dramatic. This recording preserves all that, to give the listener the full air of authenticity Dumas so carefully manufactures.

Celebrated Crimes 11: The Man in the Iron Mask

This title is due for release on January 26, 2015
We'll send you an email as soon as it is available!