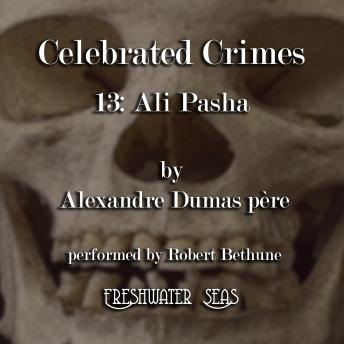 In this, the thirteenth of the series, Dumas, the novelist-historian, finds ample scope for his favorite approach. His subject is a well-documented historical figure: Ali Tepelini, most often known as Ali Pasha, and known even in his own day as The Lion of Tepelen. Dumas presents us with an extraordinary character, a man of tremendous courage, unstoppable tenacity, matchless duplicity, extreme debauchery, disgusting cruelty, and amazing ingenuity. Ali Pasha rose from a homeless teenage brigand robbing travelers on the roads of his native Albania to one of the most powerful and wealthy viziers of the Ottoman empire, the sole absolute ruler of much of what is now Greece, Albania, and other parts of the Balkans. Although he never intended to do so, he helped trigger the revolt that freed Greece from Turkish rule, a process that put the Ottoman Empire on the road to its final collapse. Ali traces his life from his earliest days throughout his career of crime until his violent death and its aftermath.

Of course, Dumas, the dramatist and novelist, cannot help embellishing the work of Dumas, the historian. He gives us words and actions that cannot possibly be part of the historical record from scenes that are as effectively histrionic as they are undocumented. However, all his melodrama is well based on his history, and he certainly makes a wonderful tale out of his materials.