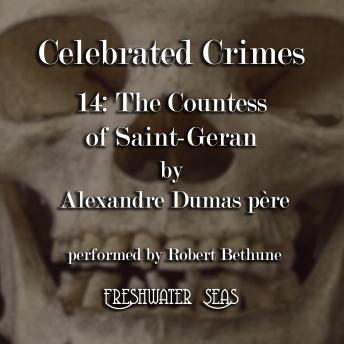 Celebrated Crimes 14: The Countess of Saint-Geran

To paraphrase the note from the translator, The Celebrated Crimes of Alexandre Dumas père was not written for children. The novelist has spared

In this, the fourteenth of the series, Dumas, the novelist-historian, brings his story-telling skills to a famous subject: the background of one

of the most famouse of French lawsuits, that centering around the secret abduction of Bernard de la Guiche, later Count of Saint-Geran, from the

gives us the whole story, basing his tale on well-established historical sources, from the time when the Marquis first insinuated himself into

the family to the outcome of the lawsuit contesting Bernard's identity and legitimacy as the heir of the La Guiche fortune. It is a story of

Of course, Dumas, the dramatist and novelist, cannot help embellishing the work of Dumas, the historian. He gives us words and actions that

cannot possibly be part of the historical record from scenes that are as effectively histrionic as they are undocumented. However, all his

melodrama is well based on his history, and he certainly makes a wonderful tale out of his materials.

Dumas may have collaborated on this, as he frequently did in his works, with other writers. Nevertheless, it is clearly Dumas who has the final

say on this work, as with all the other works in this series.

Celebrated Crimes 14: The Countess of Saint-Geran

This title is due for release on April 25, 2015
We'll send you an email as soon as it is available!