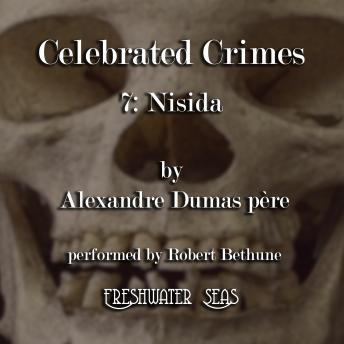 However, in this, the seventh of the series, Dumas turns away from the bitter hatreds and bloody cruelty of the preceding stories. He lets the novelist take over from the historian, giving free rein to his storytelling instincts. The story of Nisida is worthy of an Italian opera in the great romantic tradition, and indeed Donizetti attempted it, but without success. It is the story of an attempt by a womanizing nobleman to seduce and ruin the daughter of a poor but admirable fisherman, an attempt that ends in his death at the hands of her brother, who is then sentenced to die and is executed, but not by the hands of the law.

The story is told in lush and melodramatic style, tending in places to comedy. It is as if Dumas just had to give himself a break after the harsh, tense history of the preceding titles in the series, and turned his gift for melodrama and high coloring loose with a passion.

Dumas does claim that the story is based on the records of an actual case. If so, the case is well buried, or Dumas changed too many names and details to permit us to track it down with certainty.

This title is due for release on September 22, 2014
We'll send you an email as soon as it is available!