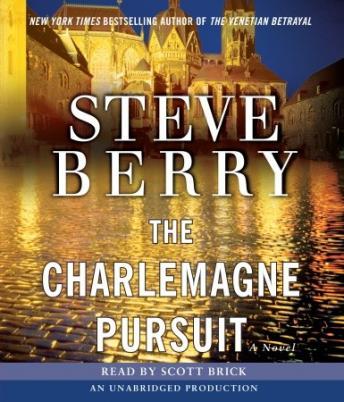 The Charlemagne Pursuit: A Novel

As a child, former Justice Department agent Cotton Malone was told his father died in a submarine disaster in the North Atlantic, but now he wants the full story and asks his ex-boss, Stephanie Nelle, to secure the military files. What he learns stuns him: His father’s sub was a secret nuclear vessel lost on a highly classified mission beneath the ice shelves of Antarctica.

But Malone isn’t the only one after the truth.

Twin sisters Dorothea Lindauer and Christl Falk are fighting for the fortune their mother has promised to whichever of them discovers what really became of their father–who died on the same submarine that Malone’s father captained.

The sisters know something Malone doesn’t: Inspired by strange clues discovered in Charlemagne’s tomb, the Nazis explored Antarctica before the Americans, as long ago as 1938. Now Malone discovers that cryptic journals penned in “the language of heaven,” inscrutable conundrums posed by an ancient historian, and the ill-fated voyage of his father are all tied to a revelation of immense consequence for humankind.

In an effort to ensure that this explosive information never rises to the surface, Langford Ramsey, an ambitious navy admiral, has begun a brutal game of treachery, blackmail, and assassination. As Malone embarks on a dangerous quest with the sisters–one that leads them from an ancient German cathedral to a snowy French citadel to the unforgiving ice of Antarctica–he will finally confront the shocking truth of his father’s death and the distinct possibility of his own.