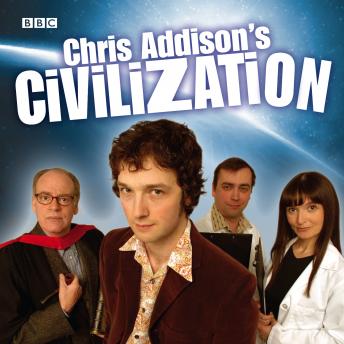 Based on his Perrier-nominated Edinburgh hit show of 2004, Chris Addison's Civilization is a comedy lecture series for Radio 4. It neatly follows on from Chris's first Radio 4 series, The Ape That Got Lucky. Western Civilization, like many very old things, is pretty much on its last legs. And if Western Civilization as we know it is dying sooner rather than later, we're going to have to build ourselves a new one. And how are we going to do that, then? Chris Addison's Civilization explores exactly what we need to create a new, shinier, betterer civilisation (apart from planning permission - that's obvious). Accompanying Chris on his journey is noted expert and renowned polymath Professor Austin Herring (Geoff McGivern). Dan Tetsell and Jo Enright are also on hand to illustrate the jokes, stories, wild conjecturing, half-truths and even facts that make up the lectures.