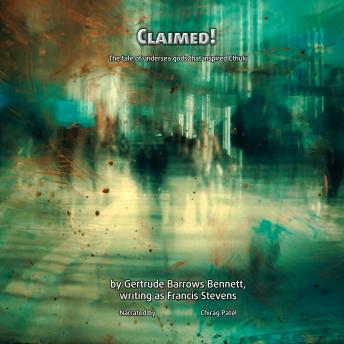 Claimed!: The Tale of Undersea Gods That Inspired Cthulu

Gertrude Barrows Bennet is better known by her pen-name, Francis Stevens. With a career that only spanned three years between 1917 and 1920, when she stopped writing after her mother's death, she is credited as 'the woman who invented dark fantasy'. She was a direct influence on H.P. Lovecraft, and in the words of Sam Moskowitz was the 'greatest woman writer of science fiction in the period between Mary Wollstonecraft Shelley and C.L. Moore'

“Mysterious, beautifully written, at times hallucinatory, and with a creeping atmosphere of dread to spare, 'Claimed' is most surely an impressive piece of imaginative work. The author does not shrink from the depiction of violence and bloodshed, either. As in 'The Citadel of Fear,' here, an ancient god appears in modern times to stir up trouble, but in 'Claimed,' that god is never named (although Poseidon/Neptune is strongly suggested) or even clearly seen.

[we see] the horrendous fate that befell the continent of Atlantis, and just how the coveted box wound up in the drink to begin with, and it really is some fascinating stuff. Vanaman, Leilah and especially old Robinson, I should add, are all well-drawn characters, with the good doctor being especially likable and sympathetic. Stevens peppers her novel with many memorable and haunting scenes, including an early exploration of the newly risen, barren island where the relic is initially found; a clairvoyant's unfortunate attempt to perform a little psychometry on the arcane object; and, indeed, the entire final 1/3 of the book, comprising as it does a tense chase at sea. The book has great sweep and drive, and is fairly relentless once it gets moving. Personally, I could not wait to get home after work to get back to it, and the evenings that I spent reading 'Claimed' were very gripping ones, to be sure.” [Sandy Ferber, fantasyliterature.com]

Claimed!: The Tale of Undersea Gods That Inspired Cthulu