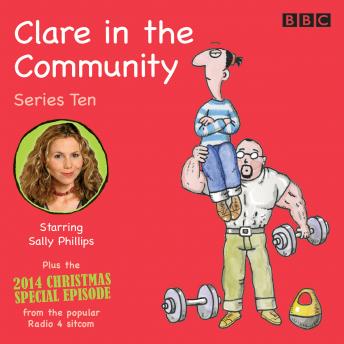 Clare in the Community: Series 10: Series 10 & a Christmas special episode of the BBC Radio 4 sitcom

‘The best comedy on radio’ Moira Petty, The Stage

Clare Barker, the social worker with all the politically correct jargon but none of the practical solutions, continues to struggle with her professional and private life in these seven hilarious episodes, which include a special Christmas edition of the show.

In Christmas with Clare Barker, Clare is working through the holidays, and has had enough of the whole seasonal shebang. But will a chance encounter bring back a bit of festive magic?

Series Ten sees Brian going on a fitness kick and joining a men’s group. Clare, meanwhile, gets involved with a TV producer making a documentary about the Sparrowhawk estate; faces some home truths at a family funeral; attempts to co-operate with her estranged sister and intervenes with Nali’s ex-husband. Plus, the Sparrowhawk team work together to overcome a little problem in the office; and hold a leaving do, taking the opportunity to reminisce.

Sally Phillips stars as Clare, with a supporting cast including Alex Lowe as Brian and Nina Conti as Nali/Megan.