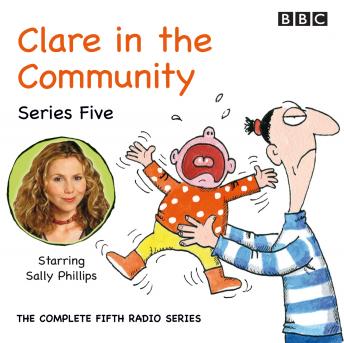 Clare In The Community: Series 5

Splendidly self-obsessed social worker Clare Barker is back in the community and as entertaining as ever in the fifth series of this acclaimed BBC Radio 4 comedy. In these six episodes, Clare finally manages to make friends, has a new trainee social worker to break in and the family centre is the focus of a documentary film. An old university friend visits Clare - and has a confession to make - while at work Clare has to deal with Tibetan Singing Bowls and a team leader seeking brutal and honest feedback. Clare also hosts a garden party to get to know her new neighbours, Ray is determined to sing his folk songs, and Clare and Ben are now parents of an, as yet, unnamed child. Sally Phillips stars as Clare, with Liza Tarbuck as Helen, Alex Lowe as Brian, Richard Lumsden as Ray and Nina Conti as Megan in a further round of team meetings and eleven o’clock cakes.

Clare In The Community: Series 5