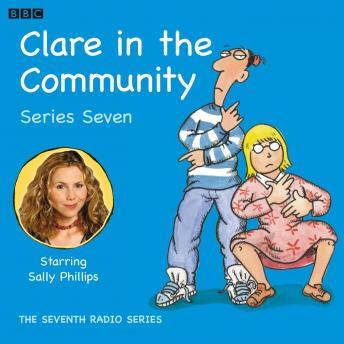 Clare In The Community: Series 7 Complete

In this seventh series, we join Clare in her continued struggle to control both her professional and private life. These six episodes see Clare struggling to come to terms with Brian's infidelity. She ends their relationship and is surprised by her colleagues' reaction to the news. Brian tries to win her back with romantic gestures and even proposes marriage - can he change her mind? In addition, Clare is concerned she may be linguistically out of touch with today's youth; her driving lessons lead to an unexpected encounter; she meets Bradley Bigg, whose pop music influenced and shaped her as a teenager; and she prepares for a very special occasion... Starring Sally Phillips as Clare, Alex Lowe as Brian, Nina Conti as Megan/Nali, Richard Lumsden as Ray, Liza Tarbuck as Helen, Andrew Wincott as Simon and Sarah Kendall as Libby. Written by Harry Venning and David Ramsden. Producer Katie Tyrrell. 'Beautifully observed performances... an impressive cast and some genuinely funny writing make this a must' - The Stage.

Clare In The Community: Series 7 Complete

This title is due for release on April 2, 2012
We'll send you an email as soon as it is available!