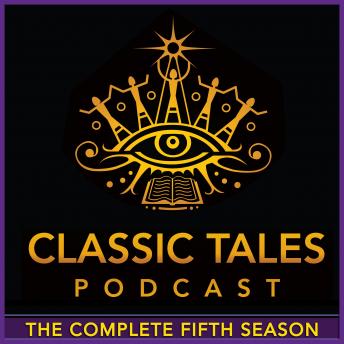 B. J. Harrison
A free trial credit cannot be used on this title

Mystery, Adventure, Horror, Romance. You can get a healthy mix of it all in The Classic Tales Podcast, Season Five. An anthology of all of the stories released through the podcast during 2011. Over 36 hours total! ¶ Optimized for mobile listening, with story specific artwork for each story and chapter, this is one binge worthy collection! ¶Titles in the anthology include the following:¶The Mysterious Affair at Styles, by Agatha Christie (novel)¶Poems by Edgar Allan Poe, including The Raven, The Sleeper, Bridal Ballad, The City in the Sea, Dreams, El Dorado, and Annabel Lee¶Lord Arthur Savile's Crime, by Oscar Wilde¶The Black Cat, by Edgar Allan Poe¶Jeeves Takes Charge, by P.G. Wodehouse¶A Chapter in the History of the Tyrone Family, by Sheridan Le Fanu (novella)¶A Room With a View, by E.M. Forster (novel)¶The Mark of Zorro, by Johnston McCulley (novel)¶Anthem, by Ayn Rand (novella)¶The Lord of the Dynamos, by H.G. Wells¶Playing With Fire, by Arthur Conan Doyle¶The Judge's House, by Bram Stoker¶In Letters of Fire, by Gaston LeRoux¶The Red Headed League, by Arthur Conan Doyle¶Jeeves in the Springtime, by P.G. Wodehouse¶Deep Waters, by P.G. Wodehouse¶The Aunt and the Sluggard, by P.G. Wodehouse¶A Kidnapped Santa Claus, by L. Frank Baum¶The Snow Queen, by Hans Christian Andersen (novella)¶The Man Who Lived Backwards, by Charles F. Hall

This title is due for release on January 17, 2020
We'll send you an email as soon as it is available!