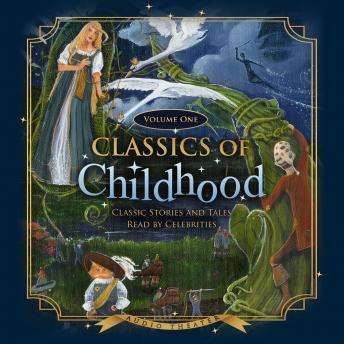 This collection of children's stories offers a mix of some bestloved tales as well as newer favorites. Included are
'Puss in Boots,' read by Robby Benson;
'A Day at Santa's Workshop,' read by Betty White;
'Elfis, the Elf Who Saved Christmas,' read by Brian Austin Green;
'Jack and the Beanstalk,' read by John Ritter;
'Peter Pan,' read by Sandy Duncan; and
'The Wild Swans' and 'The Elves and the Shoemaker,' both read by Michael York.

''The Wild Swans' is an old classic. 'The Elf Who Saved Christmas' may be a new one. Old and new are freely mixed in this intriguing collection read by celebrities, albeit names that most kids won't know (except for the newly hot Betty White). As name actors, the narrators all have appealing voices, and sometimes a connection to the material. Sandy Duncan, for instance, played Peter Pan on Broadway and here reads 'Peter Pan,' the collection's longest story. British actor Michael York is the only actor to read twice, and it's a joy to hear him handle both 'The Wild Swans' and 'The Elves and the Shoemaker.' The celeb/classics concept is continued on two more Classics of Childhood volumes.''AudioFile